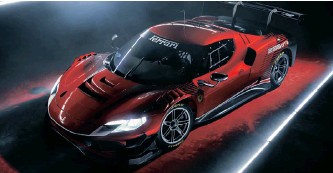 FERRARI pulled the covers off its brand new 296 GT3 race car at the 24 Hours of Spa this past weekend. Although it was revealed in the paddock rather than raced, the GT car is expected to make its track debut at the 2023 Daytona 24 Hours. This is the car that will in future fly Ferrari’s flag in GT racing, a sector that sees the greatest transfer of technology to production cars. Based on the 296 GTB road car, it sees the return of six-cylinder power to Ferrari’s GT race car, although due to regulations it doesn’t have the hybrid electric drivetrain found in the road car. The V6 competition engine is, however, based on its road-going equivalent, with turbos mounted inside the vee, and it is paired with a six-speed transversal sequential gearbox developed specifically for this car. The engine produces around 447kW at 7250rpm and 710Nm at 5500rpm. “Ferrari’s engineers worked with those of its partners to design and fine-tune all the engine’s internal fluid dynamics and the specific components adopted for the track version of the power unit,” Ferrari said. “They aimed to provide uncompromising performance, reliability and driveability for both ‘Sprint’ and ‘Endurance’ races. For this type of competition, they did everything to limit consumption significantly without sacrificing performance, aiming for more flexible race strategies and reduced intervention times. For example, the alternator is attached to the gearbox to improve the unit’s compactness and rigidity and make it easier for technicians to access.” As for aerodynamics, engineers created an aerodynamic configuration within the homologation performance window by reducing ride height sensitivities to improve handling and overall driveability. This precise and detailed work on the shapes yielded a gain of 20% in downforce on the car over the previous generation, Ferrari said. The chassis, although drawing on the experience gained with the 488 GT3, is totally new and made from aluminium. The race car also has a longer wheelbase than its road-going equivalent and a different front and rear double-wishbone suspension design, including dedicated structures and kinematics. “Besides being extremely easy and fun to drive, the 296 GT3 can exploit the grip potential offered by the tyres without compromising their integrity in just a few laps, benefiting performance and repeatability,” Ferrari said. “The chassis’ extreme lightness, which in the 296 GT3 also allows better and more efficient ballast management, contributes to this.” The Italian carmaker added that it’s also easier to modify the 296 GT3’s set-up during or prior to a race as the mechanical and elastic components have been made more accessible. Test drivers have completed thousands of kilometres to prepare it for life on the race track, starting in 2023.