SA in the stands for UK e-race 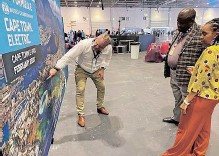 SOUTH African Tourism kicked off its new campaign “Live Again” at the Formula E race in London in anticipation of the R2 billion cash injection the all-electric vehicle race is expected to provide when it takes place in Cape Town in February next year. South Africa’s new high commissioner to the UK, Jeremiah Mamabolo, attended the London event and said South Africa was the only country on the race calendar to be showcased in the heart of London’s race village last Saturday and Sunday, which saw more than 30 000 motor racing fans filling the grandstands. “SA Tourism has entered into a formal partnership with local race promoter e-Movement for the next three years, which officials say will provide the opportunity to showcase to the world South Africa’s readiness to host global events and welcome travellers to our destination,” said Mamabolo. “The impact of this is huge. We are here to ensure that the UK and South Africa continue to have these relations. “The UK is our number one country in terms of investment and in terms of ensuring that we do something to alleviate the conditions of the poor and marginalised in South Africa, and having this kind of event in Cape Town will have a huge impact. “I am very impressed by what I see here,” said Mamabolo. Next year’s race in the Mother City is expected to attract 11 000 international visitors spending seven nights or more in the country. A further 10 000 domestic spectators from outside Cape Town are projected to attend, providing a total R2bn in economic impact and a further R500 million in media exposure. Formula E is growing rapidly around the world with an estimated audience of more than 400 million. Last weekend’s London race was televised on SABC and SuperSport, and SA Tourism’s new 60-second Live Again commercial was aired during the race. Formula E co-founder and chief championship officer Alberto Longo said: “We’ve had a very positive response within our ecosystem of teams, drivers and sponsors about coming to Cape Town, so we are delighted that the city is joining the Season 9 calendar.”