TURKMEN TERZI A Turkish journalist based in Johannesburg 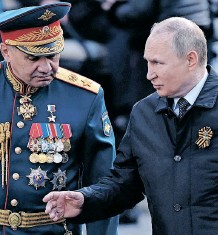 RUSSIA’S President Vladimir Putin, who dreams of rebuilding the Russian Empire, had for a very long time been planning the “special military operation” that was supposed to result in the invasion of Ukraine. In his address to the military parade on Red Square of Moscow on Monday, marking the Soviet Union’s World War II victory over Nazi Germany, Putin justified his war on Ukraine by drawing parallels with the Red Army’s fight against the invading Wehrmacht of Nazi Germany and Russia’s war on Ukraine. Putin says the North Atlantic Treaty Organization (Nato) was preparing to admit Ukraine as a member so that it could target Russia from its doorstep and he had acted timely to prevent Western attack. Putin believes Joseph Stalin should have attacked the Nazis first instead of waiting for Hitler to target Russia with the launch of Operation Barbarossa. Instead of waiting for what he believed was an imminent attack from Nato, Putin decided to act first and fast. However, the problem for Putin is that his war on Ukraine is not going as planned with Russia losing thousands of soldiers and facing crippling economic sanctions from the West. Putin, a former KBG agent, has been in power since 2000 and he has largely reinstated Russia’s power in the Soviet Union’s former Central Asian territories. Under Putin’s rule, Russia has reestablished strong ties with the Central Asian Turkic states of Azerbaijan, Kazakhstan, Uzbekistan, Kyrgyzstan, Turkmenistan and Tajikistan – the former Soviet republics that obtained their independence upon the collapse of the Soviet Union in 1991. Moreover, Putin has control over Chechen leader Ramzan Akhmadovich Kadyrov, who serves as the Head of the Chechen Republic. The Chechen nation is known for their fight against Russian dominance for the past two centuries, but Kayrov’s forces have been fighting for Putin in Ukraine since the war started. Putin’s Russia has been propping up Syria’s President Bashar Al-Assad despite the US and Turkey’s proxy war in Syria against Assad since 2011. Putin’s Russia has for the first time managed to have a permanent military base in the Mediterranean as Moscow controls Syria’s Tartus Naval Base. The Russian military also maintains its presence in Syria at an air base in the coastal province of Latakia. Russia also maintains considerable forces in Libya and Putin hosted dozens of African head of states for the first Russia-Africa Summit in October 2019 to increase influence in the continent as Russia’s ties weakened with Africa following the collapse of the Soviet Union in 1991. Putin’s invasion of Crimea in 2014 was a key achievement for Russia’s military expansion as Russia’s biggest Naval base is Sevastopol – a strategically important base for Russia’s Black Sea naval fleet, and Russia’s only warm water base. It has been an important hub to project Russia’s naval power on a global platform. A nationwide survey conducted between February 28 and March 3 showed that around 58% of Russians approved of the invasion of Ukraine, while only 23% were opposed to it. These results are understandable as today’s Russian adults and older generations grew up in Soviet rule and they are excited at Putin’s great Russia plan. Russia has vast energy resources but the majority of the population has a very modest standard of living. On the other hand, Russian oligarchs and Generation Z do not seem very happy with Putin’s war. Since Russia invaded Ukraine, the US, the UK, the EU and many other countries have declared economic war on Russia. Russians have found themselves very isolated in the world as they are excluded from research institutions, cultural, sporting events, and the EU agreed to exclude key Russian banks from the SWIFT system, the world’s dominant financial messaging system, in protest at Russia’s invasion. Many international companies, including McDonald’s, closed their doors in Russia and the sanctions also targeted oil refineries, military and luxury products. Russian oligarchs who have close ties with Putin find themselves in a very difficult situation as their accounts have been frozen and their wealth has been seized in many Western countries. Putin’s invasion also badly affected Russian students in the country and abroad. “I moved to Germany last year to get my Master’s. However, my whole family is in Russia. I have a residency permit right now, but it expires in May. I’m anxious about whether I’ll have issues renewing it due to me being Russian. My family has already seen changes in prices. My sister was struggling to get baby products for my nephew because the prices skyrocketed. One of my brothers-in-law and my father will potentially lose their jobs because their businesses worked very closely with European businesses,” a 28-year-old Russian student Tatyana said, explaining her heartbreaking situation to the Al Jazeera network. Italy, France, Spain, the UK and Gibraltar have seized superyachts and multimillion-dollar properties that belong to the Russian oligarchs and thousands of Russians have since been sanctioned by the US, the EU, and the UK, among others. On the other hand, Turkish Foreign Minister Mevlut Cavusoglu welcomed sanctioned Russian oligarchs into Turkey in March. Russia takes censorship to an extreme level as using the terms “war” and “invasion” can land someone in prison for up to 15 years under a new Russian law. It seems that many Russians who supported Putin’s war may not be aware of Russia’s military losses in Ukraine and they may not be aware that the Russian warship Moskva, the flagship of Russia’s Black Sea Fleet, sank on April 14. In the short term, Russians may not raise their voices against Putin’s rule, but a militarily weak Russia faces more external security threats and Putin will also have to postpone his expansionist foreign policy to reinstate his power within the country.