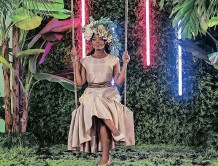 SKIN lightening is one of the most dangerous things in the beauty industry. It is common among people who want their skin to be a shade lighter than it already is. Those who can’t afford to bleach their skin at well-known skin clinics, resort to cheap skin-lightening creams which, in the long run, can be harmful to the skin. Last year, IOL Lifestyle visited the shooting set of Savage Beauty, the Netflix original series that premiered on Thursday. Speaking to the director of the series Rea Rangaka, at Nelson Mandela Bridge, where they were shooting the final scenes of the show, he took us through what the series was about – and no, it has nothing to do with Rihanna’s beauty line. Savage Beauty follows a young woman who discovers dark secrets within the beauty industry and exposes them. “The series follows the main character of Zintle, who has built herself up from rags to riches, from working at restaurants since she was a street child, and was used as a test subject for illegal skin-bleaching projects, financed by the Bhengu family. A few years later, she emerges and infiltrates the tangled dynasty to take them down and destroy their family for what they did to her and her brother. It’s pretty much about a revenge story, with high stakes and high fashion,” says Rangaka. The six-episode series will bring fresh talent that will be revealed through fashion. The characters are decked out in show-stopping designs from South Africa’s top designers. “Within the different characters and their different personalities, we want to show them through fashion,” says Rangaka. Sulet Meintjies, head of design of the series, added to the extravagant fashion that is presented throughout the show. “The audience can expect some super glam. The production design is a feast for the eyes. It’s a bit more out there for some characters than what we’ve seen on local TV,” says Meintjies. She adds: “Expect to see the works of Gert-Johan Coetzee. His designs are extravagant, glamorous and show-stopping. I also tried to use some small local fashion brands where we were able to. We also had some amazing tailors and seamstresses, helping to create the oneof-a-kind looks.” Meintjies says that when she was picking the wardrobe for the characters, it was important for them to make sure that it looks South African and not “American glam”. “I still want the audience to be able to relate or feel like looks are attainable, so it’s about finding that balance, while also creating some iconic looks,” she says. Every outfit must be accompanied by a sterling make-up look. Theola Booyens, head of make-up, says that they invested more in beautiful, natural make-up, as opposed to creating extreme make-up looks. “It is high fashion, so we got excited and a little carried away by the idea. We wanted to be trendsetters, but we also looked at keeping it classic. We added some nice highlighters, shimmers and golds,” says Booyens. In terms of hair, Rosemary Zimu, who plays the main character, Zintle Manzini, had to make some drastic changes and cut the dreadlocks that she’s had for seven years. She says that at first she was emotional when she had to go bald, but took it as an opportunity to start afresh. “Seven years is the number of completion and new beginnings. Also, I had known that there was going to come a time for me to make drastic changes to fit my characters. To bring characters to life we need to make some sacrifices and, for me, this was it. I am currently in love with my bald head. “Depending on the characters that come in the future, maybe I’ll put my dreadlocks back. But if I don’t, I’ll probably burn them and have a whole goodbye session,” she says.