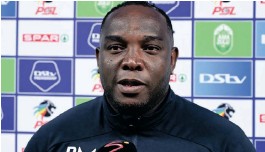 BAFANA Bafana all-time top goal scorer Benni McCarthy says he’d jump at the opportunity to coach either of the Soweto giants, Orlando Pirates and Kaizer Chiefs. The rivalry between the two teams has divided many personnel in the football fraternity, with some vowing that they’ll never join or work for the other camp. However, McCarthy, a Uefa A Pro Coaching licence holder, is open to coaching any of the two teams ahead of the new season should an opportunity arise. This is not due to desperation for the unemployed McCarthy though. Far from it. McCarthy’s affiliation with both teams runs deep. He supported Chiefs while growing up in the rough neighbourhood of the Cape Flats. Upon his return to the country, following an illustrious stint abroad where he won the Uefa Champions League, McCarthy helped Pirates win the championship, MTN8 and Telkom Knockout as a player. Chiefs and Pirates are going through a coaching conundrum, with the former coachless after parting with Stuart Baxter, while many a Ghost is unhappy with coaching duo Mandla Ncikazi and Fadlu Davids this season. Speaking to the media on the sidelines of the Heineken All Invitational launch yesterday, McCarthy said he’s ready to serve at either Chiefs or Pirates if called upon. “Just a rumour. Some articles spreading the news, people making noise, I can understand the fans' frustrations,” said McCarthy about talks linking him to the Soweto giants. “You know Chiefs is a big club, they should be in a better position to compete with (Mamelodi) Sundowns and most clubs in the league. And so are Pirates. But they’ve both not done that. “But I am sure the club is working on rectifying that and come next season, they can compete and push Sundowns. And get the right people in. “But for me, I’ve not been in contact with either team. But we’ll see about that. I’ve played for one team and supported the other one as a kid. “So which coach in the world, except for Pep Guardiola, (Carlo) Ancelotti and (Jose) Mourinho, (wouldn’t want to coach the two clubs)? “I think the majority of coaches, anywhere in the world, if you get an opportunity to coach either Chiefs or Pirates, you go for it. I don’t think you say ‘no you’ll hear them out’. And I’m no different to any of them. “I’ve got my own aspirations and when you get such an opportunity and it knocks on your door, you open and let them in!” Being in his fifth year as a coach, McCarthy already has a couple of feathers in his cap. He won the MTN8 with Cape Town City and helped Usuthu finish second on the log and qualify for their first CAF Champions League group stage campaign, before he recently parted with the Durban side.