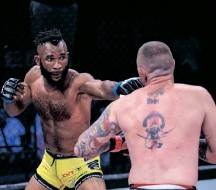 FIGHT fans will be relieved to know that Masefi Ngoma is breathing on his own post EFC Fight Night 2. The Middelburg athlete (0-2) who fights out of XKT was taken to hospital following his loss to Apex South and Johannesburg’s Robert Swanepoel (1-5) at the Extreme Fighting Championship Performance Institute last Saturday. Swanepoel walked out of the fight victorious after finishing Ngoma early in the second round via technical knockout due to strikes. It is unclear what transpired or what condition Ngoma was in immediately after the fight. However, Mixed Martial Arts South Africa (MMASA) confirms that following a call by the EFC medical staff, Ngoma was immediately taken to the Netcare Milpark hospital in Johannesburg. “Masefi Ngoma was swiftly dealt with by the EFC medical team on site before being transported to hospital for further treatment,” says MMASA president Raymond Phillips. “Ngoma was then placed in a medically induced coma for observation and the necessary medical tests, treatments and procedures at the hospital. I understand that he was taken off the ventilator today (yesterday) and is breathing on his own,” said Phillips who couldn’t confirm whether Ngoma’s hospitalisation had any link to the shots landed on the head or body during the fight. According to MMASA, all necessary protocols and testing required prior to fights were followed and observed, declaring the fighter fit to participate.