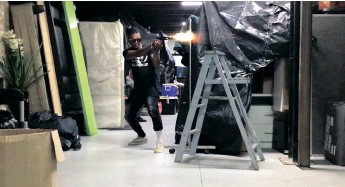 CAPE Flats youngsters were busy shooting in the last few months but no lives were claimed as they were making a new film called Dear Swart, the black disciple. The short film is about a vigilante out for justice and will be released on June 18. The first viewing is set to take place at The Las Vegas Lounge in Mitchells Plain. The actors are from communities such as Delft, Mitchells Plain, Belhar, Silversands, Eerste River and Parow. The project was presented by Touched by Style, a Delft-based organisation that creates opportunities for talented youth in performing arts by developing projects in dance, stage performances, drama and film. “Filming began in April and was filmed at the Waterfront, on a boat, Century City, and Killarney Gardens,” said Norton Ngatche. “The youths and young adults were very excited and would have never thought they would appear in an action film where they had to give chase, shoot guns, etc.” Leano September, who plays the villain, Hex, said that coming from a fractured community where few opportunities are available, it was a blessing that he got the role. “Acting has always been my passion. It’s what I love to do and hope to do for the rest of my life. I never received any training for acting other than performing in church plays. So this was my first film and the experience was amazing.” The organisation started in September last year, when six-time solo dance champion Nic Matthee decided to create a realistic environment in the film industry by having dancer Patrick Lategan on the duo team. The interest and support of the communities were overwhelming when they shot their first short music clip at the Castle of Good Hope, followed by one in Century City. The peak of their projects was a local recreation of Michael Jackson’s Smooth Criminal, which received two awards. “A huge number of youths and young adults are now reaching out to the organisation from as far as Paarl, Stellenbosch and Mossel Bay; however, the team is still at its building stage,” said Ngatche. The film will be showcased in various areas around the Cape Flats with the hope of attracting more young people to join or start their own projects.