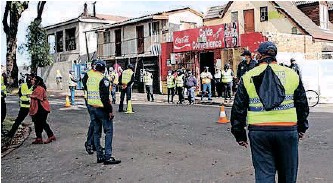 ANGRY residents confronted a ward councillor over a lack of action in front of Premier Alan Winde during a ride-along in the greater Steenberg community yesterday. Winde and MEC for Police Oversight and Community Safety Reagen Allen were launching the Law Enforcement Advanced Plan’s (Leap) reaction unit in the Steenberg, Retreat, Cafda and Lavender Hill communities. The reaction unit was established in February. Prior to this, residents formed their own street committees. As soon as Winde, Allen and members from the Leap team and their ward councillor, Shanen Rossouw, arrived at their first check-out point along Peter Charles Street, residents aired their concerns. Amani Robinson and Rowena Hendricks said they were the ones who had called police and law enforcement in February after two men and later four children were shot. “When the two church brothers were shot in February, the community had to pick up the bullet casings,” Robinson said. “Then after that four children were shot while children were also playing soccer on the field. The community had to keep the crime secure and clean and we waited 35 minutes for law enforcement to arrive, who came unharmed. Now today, we see the premier is here and that the ward councillor only communicated to the community via Facebook on Thursday. “She never responds when we contact her about issues regarding shootings and what she wants us to do,” she said. Winde said solutions had to be found. “What we are here to talk about is that we have these drive-by shootings, we want to halve the murder rate, we want to make sure we are deploying extra resources because SAPS do not have sufficient capacity,” Winde said. Robinson said her father and three women carried out patrols and that there were no neighbourhood watches established and that they had sleepless nights keeping their streets safe. Councillor Rossouw then added that she could defend herself. “Premier, I am done with them harassing me. If they are going to attack, I am going to attack back.” The Leap officers were deployed to Lavender Hill, Steenberg and Grassy Park following a spate of gang-related shootings and stabilised the area and were also moved to Nyanga, Gugulethu and Mfuleni. Among their successes the Leap reaction unit searched 22 021 people and 632 houses, conducted 140 vehicle checkpoints, searched 2 753 vehicles and made 260 arrests. Winde said: “They are deployed this reaction unit. They are to help the police when we have these flare-ups and shootings and how we halve the murder the rate, is it working and is it stabilising the area.” Allen said crime intelligence would form part of their operations. “We have highlighted the lack of criminal intelligence on the ground. “We are working with the South African Police in that regard, especially with the mass shootings which are happening and how we are tracking the arrests. “We do know that intelligence is being built up on gang activity, which gangs are in conflict, which territories they are controlling,” Winde said.